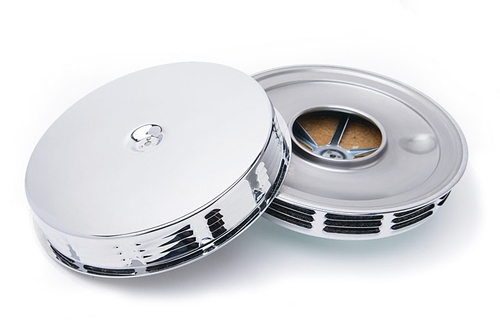 In 1955 Gene Smith bought a black 210 Del Ray. It was a 265 with a 3 speed overdrive and 4:11 gears. It was the first power-pak equipped car that Lew Williams Chevrolet of Hollywood, California, delivered. Which explains the 60 miles on the oddo when Gene picked it up that evening; everyone at the dealership wanted to drive it! Unbeknownst to everyone, including Gene, that was the start.

Gene worked for a body shop through high school and became, among other things, a painter. In 1969 and 70 Gene built a car in his backyard. That coral and grey '55 won Best Paint at a show back East. As a result, Gene was "commissioned" to build cars for customers. The first frame-off was done in his backyard in 1970. NOS parts were more available then, but still, Gene needed parts for customer cars, and that became the start of Gene Smith Quality Reproduction Parts and Accessories. Over a dozen frame-offs were done in that backyard, along with parts in the garage. Gold louvers and outside mirrors were the first products, followed by power-pak exhaust extensions, and later early Corvette parts!

We're car guys, love 'em, build 'em, drive 'em. If we wouldn't put the part on our car, we won't put it in the box! We work to be as accurate as possible, which isn't always easy as materials, hardware and processes have changed from the "non-computer 50's". All Gene Smith Corvette Parts are manufactured in America, most right here in Southern California. We also have some components manufactured for us in Pennsylvania and Ohio, all with the goal of the best possible parts in fit and finish. Parts we can all be proud of! Nothing that Gene Smith Corvette Parts sells is made anywhere other than the continental 48 states.